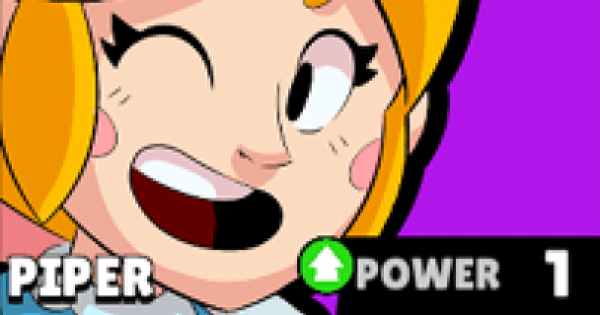 Learn the stats, play tips and damage values for PIPER from Brawl Stars! In this guide, we featured the basic strats and stats, featured Star Power & Super Attacks!

Piper's sniper shots do more damage the farther they travel. Her Super drops grenades at her feet, while Piper herself leaps away!

How to Get PIPER

Piper shoots out her attack from the tip of her parasol - in a straight line. It does more damage the farther the target it hits, so time your shots well!

Piper jumps and floats away from danger, leaving behind 4 grenades that blast the area where she was standing for 900 damage each. This move is very useful in escaping dangerous situations.

When hidden in a bush, Piper's attacks will hit for +400 extra damage (at max range). Stick to Events and maps that have many bushes and will keep you well-hidden to dish out the most damage.

When Piper hits an enemy with her attack, she reloads 0.5 ammo instantly. In the hands of an experienced player, Piper's damage output will greatly increase.

Roam The Map & Hide In Bushes

Piper works best sniping enemy Brawlers from the sidelines and the bushes. Keep her hidden & mobile, going around the map and making few choice shots to finish off enemies.

Playing Piper needs experienced hands and a relaxed trigger finger. Her reload time is pretty long so it's best to make a few well-placed shots instead of going ham with her attacks.

Piper's shots are extremely long-ranged and do more damage the farther the target when it hits. Use her to snipe enemies from afar but keep in mind that her shots are fired in a straight line.

Eliminate An Enemy Then Go Back Into Hiding

The best way to play Piper is to pop in and out of Brawls. When an enemy is within range, unleash your entire ammo on them until they pop then go back into the bushes to reload.

Piper's Super propels her into safety, into the air. It also leaves damaging bombs when she jumps up. Use this escape dangerous moments when your health is low.

Attack From Behind Other Brawlers

Use Piper to snipe enemies from afar, away from the front lines. She excels in picking off enemies from the sides or while hidden, allowing her to send her shots out with precision.

Use Super To Get Away From Fight

Piper's Super can launch her into the air and away from battle. Keep this in mind when the battle gets too hot and close to Piper to keep her alive and safe.

Stay Back & Finish Off Enemy Brawlers

Since Piper's shots reach very far, it's best to use her to finish off enemy Brawlers. Have your allies damage enemies enough then send in a single shot to completely deplete their HP.

Keep To The Bushes & Sides

Don't make Piper move into the center of the map. Keep her hidden and to the sides where enemy Brawlers won't notice her until she shoots them with her snipes.

Support Team By Picking Off Enemies

Move with your team and support them by picking your enemy's team off one by one. Piper should focus on eliminating enemy Brawlers that can steal the ball or bring it closer to the home goal.