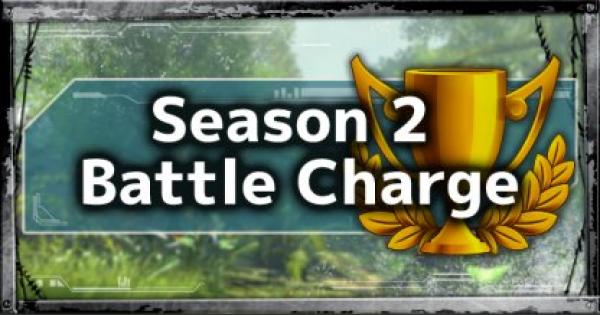 The second season of Apex Legends has some big things coming to King's Canyon, and it kicks off on July 2, 2019!

A massive EMP has been detonated by a mysterious figure inside King's Canyon forever changing the landscape of the map. King's Canyon is now home to winged beasts, and previously barren areas have are now host to a number of plant life.

A ranked mode will be implemented in the 2nd season of Apex Legends where players progress through 6 tiers (Bronze ~ Apex Predator). Each tier goes through a special matchmaking process which pits them against players of the same level.

Earn Rewards Based On Your Tier

You will earn rewards based on your ranked tier at the end of the season which you can use to show off how fierce you are on the battlefield! As of the time of writing, there are no specifics regarding what rewards you can get.

The Season 2 Battle Pass is now challenge-based. Daily and weekly challenges will now stack, allowing you to complete all challenges without any of them expiring!

Badges and Stat Trackers have been removed from the Battle Pass and have been replaced with new content types. One of these new types of rewards are the Skydive Emotes!

Check out the list of Battle Pass Rewards that you can earn from the second season of Apex Legends!

Check Out What Is The Battle Pass Here!

Wattson is the daughter of one of the game's lead electrical engineers. Her fascination with electricity resulted in her becoming a skilled engineer, helping build the game's ring. Wattson uses electricity to level the playing field!

Wattson uses her abilities to control and sustain the team during fights. Her pylons and fences can be used offensively to slow and damage enemies, or defensively for sustain, and quick escapes!

The L-Star is the newest weapon to be added to the game this coming Season 2! It is a care-package energy-based LMG which fires large plasma projectiles at targets!

The L-Star holds 60 rounds of energy ammo and features a fully-automatic fire mode. It's rate of fire is fairly quick, allowing you to bring down enemies with ease!

If players hold down the trigger for too long, the L-Star will overheat. If this happens, the lens of the weapon will break and will need to be replaced. Make sure to feather trigger to avoid overheating this weapon.

Only Spawns In Supply Drop

The L-Star can only be found in Supply Drops. It also comes with a limited ammo supply so make sure to make your shots count!

New Hop-Ups have been introduced to add a new layer of depth to the gameplay during fights, Disruptor Rounds and Hammerpoint Rounds increase the viability of lesser used weapons during matches.

Disruptor Rounds are a new Hop-Up for the Alternator and RE-45. These rounds increase their damage to shielded enemies. This is best used to open up a fight against enemies to quickly bring their shields down!

This Hop-Up is for the P2020 and the Mozambique. This Hop-Up increases the damage done by these weapons to unshielded enemies, perfect for finishing off opponents in fights!

The Energy Mag attachments have been added to the Havoc, Devotion, and Triple Take. Energy Mags will work like other magazine attachments. They increase ammo capacity at all levels, and reduce the reload time at level 2 and above.

The Flatline, P2020, Alternator and Triple Take have been made more powerful in order to become more viable when equipping your loadout. More specific details will be given in the Season 2 Patch Notes.

The Arc Star's stats have been adjusted to keep the weapon more balanced when against other throwables.

Starting Season 2 on July 2, player will be able to find a new set of gold weapons in Kings Canyon! The final list of weapons will be revealed in the Season 2 patch notes.

The developers have adjusted the stack sizes of weapons to keep backpack management more balanced.

The max stack for energy ammo has been increased from 60 to 80. This is useful for energy weapons that quickly burn through all of your ammo!

The max stack for Shotgun ammo has been reduced from 64 to 16, meaning that players will need to bring with you multiple stacks of shells if you want to use the shotgun for awhile.

The Airdrop weapon drops are now adjusted based on the phase of the game. Krabers will appear more often in the early to mid-game while Mastiffs will be more frequent in the end-game!