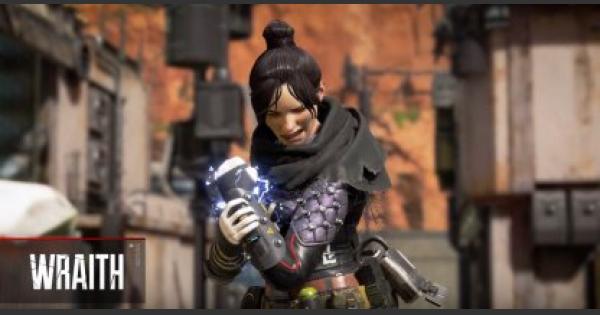 Read this guide for information on Apex Legend - Wraith. Find out more about her stats and character role - including tactical, passive, & ultimate abilities.

How To Play As WRAITH

Wraith's passive skill allows you to gain situational awareness, which is crucial for battle royale games where knowing enemy positions is almost as valuable as getting kills.

Assassinate Your Enemies Out of Nowhere

Wraith can cloak herself and setup quick kills by slipping in and out of dimensions. Your enemies will never see you coming.

You can also use her skill to escape, so you and your team can heal up and prepare for an engagement.

Wraith can be useful for setting up plays, ambushes and escapes with her Dimensional Rifts.This can also be an effective late game tactic where you can have your team slip in for the kill and escape quickly.

Tactical Ability - INTO THE VOID

INTO THE VOID - Overview

Use Into The Void to slip out of your enemies sights, then reappear behind them for an easy kill. You can also use this to assassinate enemies without them even knowing you're there!

Use Tactical Ability To Gain Invulnerability

Your tactical ability also grants you a temporary invulnerability as nothing can damage you while your ability is active. Use this not just to approach, but also to escape.

Use Your Ultimate to Teleport Your Team

Wraith's Ultimate Ability allows her to setup two portals which the team can use to slip in and out from. The portals are open for 60 seconds giving enough time to escape and heal up. This can also be useful to setup ambushes for your entire team.

Passive Ability - VOICES FROM THE VOID

VOICES FROM THE VOID - Overview

Know Where Your Enemies Are

This passive skill allows Wraith to be alerted of enemy positions, so use this valuable knowledge. Make sure to communicate this to your team. When you hear a voice, hide for cover and secure your team.

Use Abilities To Set Up Attacks

Use your abilities to approach enemies at close range. A shotgun can be a formidable weapon for Wraith for close range combat. However, be prepared to escape as needed.

When attacking enemies at long to medium range, setup a portal for your team to escape through. This can help the team regroup, or draw out attackers and ambush anyone who attempts to use the portal to get to you.

Wraith is a whirlwind fighter, able to execute swift and deadly attacks and manipulate spacetime by opening rifts in the fabric of reality — but she has no idea how she got that way. Years ago, she woke up in an IMC Detention Facility for the Mentally Ill with no memory of her life before. She also began hearing a distant voice whispering in her mind that would keep her awake for days on end. Despite nearly driving her insane, once she started to listen and trust it, the voice helped her harness her newfound power of void manipulation and escape the facility.