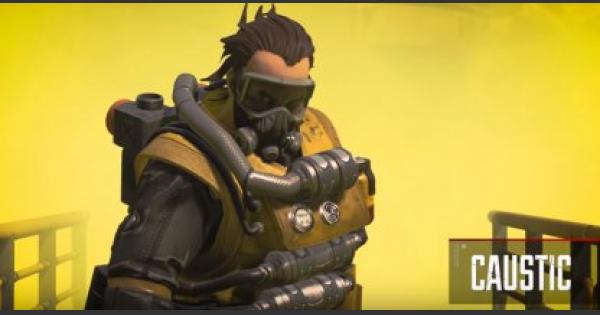 Read this guide for information on Apex Legend - Caustic. Find out more about his stats and character role - including tactical, passive, and ultimate abilities.

How To Play As CAUSTIC

Use CAUSTIC For Ambush Tactics

Caustic's skills & abilities lets him setup ambush spots with his Nox Gas Trap, which slows down enemies while dealing damage over time.

Immune To His Own Poison

Caustic is immune to his own toxic tactics thanks to his Nox Vision passive ability. This also allows you to see enemies through your toxic gas.

As his ultimate ability, Caustic can unleash a deadly cloud of poison using his Nox Gas Grenade to engulf a wide area in toxic Nox Gas.

Caustic's abilities makes him valuable for late game encounters, when fights are forced into closed and tight spaces. His skills may not be as useful in the early game however.

Best Used for Ambush and Traps

The Nox Gas Traps works best for setting up ambushes in choke points. The Nox Gas slows down enemies while impairing vision, so your team can swoop in for easy kills.

Use Your Ultimate In Large Clusters of Enemies

The Nox Gas Grenade can be advantageous in the final moments of the game, when the Ring has collapsed to a small area and enemies are clustered together.

Move In and See Through Your Traps

This passive skill allows Caustic to see through his traps, giving an inherent advantage over gassed enemies.

As part of patch 1.1.1, a new perk is introduced for Caustic called "FORTIFIED", which reduces incoming damage by 10%.

Caustic's combination of abilities allow him to gain advantage inside his Nox gas as he can see enemies through the gas. This makes him very useful in firefights.

When enemies trigger your traps, you are notified of their position. Use this when planning ambushes.

Caustic's Nox Gas can become a hindrance for teammates by limiting their visibility. Also, this can damage and slow down allies, so use carefully.

Place your Gas Traps in choke points or to defend your position from enemies. This allows you to fire at enemies while keeping them at bay.

Split Off From Team When Engaging

Before there was Caustic, a scientist named Alexander Nox worked at Humbert Labs, the Frontier’s leading manufacturer of pesticide gases. With a glut of pesticides needed to protect the growing Frontier colonies’ crops, Humbert Labs was constantly on the hunt for better and stronger formulas. Nox was one of their brightest scientists and worked day and night developing new gases. But to make sure they worked, he needed to test them on more than just inert tissue: he needed something living.