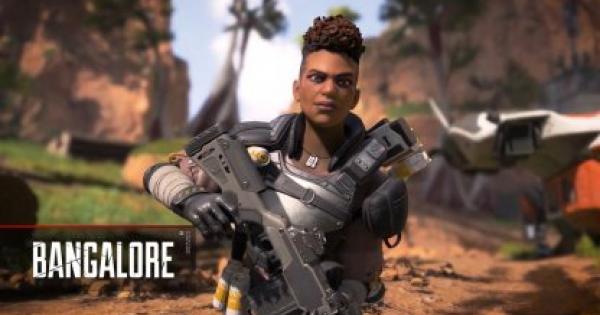 Read this guide for information on Apex Legend - Bangalore. Find out more about her stats and character role - including tactical, passive, & ultimate abilities.

How To Play As BANGALORE

Use Bangalore For Straight-Forward Shootouts

Bangalore's skills & abilities give her an infantry-type role with a heavy emphasis on artillery. She's best used in straight-forward shootouts which will have her raining bullets down on her opponents.

Bangalore can throw a smokescreen and activate a speed boost when taking fire, allowing her to jump right behind an opponent, easily taking them out in an ambush.

Bangalore's Rolling Thunder has the widest area of effect in the game. She calls in a barrage of rockets onto a wide area, making it easy to damage & sweep enemies down.

Bangalore's Smoke Launcher is a useful skill to have when your team member or yourself is caught in a pinch. The smoke screen will blur the enemy's vision, allowing you to make a quick run towards safety or when reviving a fallen teammate.

Use Smoke As Cover

There are plenty of open spaces in the map which can leave you open to enemy fire. Use the Smoke Launcher as cover as necessary to avoid damage.

Use For Reviving Allies and Looting Death Boxes

The Smoke Launcher helps in providing cover while performing time consuming actions such as looting Death Boxes, and reviving allies. Make sure to use the smoke while doing so to keep you and your team safe.

Bloodhound's Beast Of The Hunt Can See Through Smoke

Smoke Launcher has a very short cooldown time of 32 seconds, which allows you to use the ability frequently.

Activate To Finish Off Retreating Enemies

Rolling Thunder has one of the widest area of effects in terms of damage in Apex Legends. It's a great way to finish off enemies that are retreating or deal some heavy damage towards mobile targets. It's also a good move to start off your attacks when spotting enemies in the open.

Use To Force Enemies To Move

With the ability's high AOE, the Rolling Thunder ability forces enemies to move out and scatter to safety. This is best used for drawing out enemies, or force enemies to move away from advantageous positions.

Slows Down Movement For A Few Seconds

Use Only Outside Of Buildings

The ability will only work outdoors, so make sure to use this ability on open spaces only, and not inside buildings or areas with multiple structures.

This skill gives Bangalore a brief speed boost when sprinting while under fire. It's effective when pushing for getting in and out of hot situations, whether to do quick kills or making a hasty retreat.

The burst of speed that Double Time grants can also improve your performance in firefights. The skill allows you to strafe quickly and make your moves more unpredictable, improving fire fight survival.

Ability Will Not Activate Unless Sprinting

Double Time will not be activated unless Bangalore is sprinting, so if you're shot while standing still, ability will not activate. Make sure you're sprinting especially in a fire fight.

Bangalore's Smoke Launcher and Double Time allows her to increase her and her team's chances of survival, and be able to reorganize the team and recover quickly from a fire fight.

Use Smoke Launcher On The Entire Team

Make sure that you use the Smoke Launcher on your entire team, especially in many key situations such as withdrawing from a fight, or moving your team to safety. This will increase your overall team's chances of survival compared to using the Smoke Launcher just for yourself.

Born into a military family where she, her parents, and her four older brothers all served in the IMC Armed Forces, Bangalore has been an exceptional soldier since she was young. She was top of her class at the IMC Military Academy and the only cadet who could take apart a Peacekeeper, equip it with a Precision Choke hop-up, and put it back together in under twenty seconds – blindfolded.