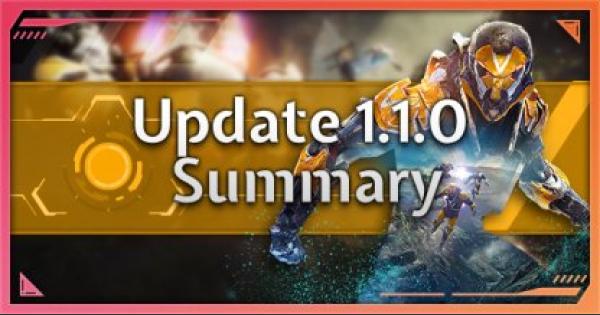 Check out this Anthem guide for a summary of changes in the new Patch 1.1.0 update released Apr. 23. This patch introduces the new Sunken Cell Stronghold and other new quality of life changes, major fixes, gameplay balance adjustments, & more!

The Sunken Cell stronghold is now live – enter the stronghold with your fellow Freelancers to put an end to the Dominion’s deadly plans.

Players who have completed the main story will now be able to play the new Sunken Cell Stronghold. In this new Stronghold mission, you'll have to fight through Dominion Forces to put a stop to their experiments on ancient relics.

For added convenience, players will now be able to change their Javelin loadout without the need to return to Fort Tarsis or the Launch bay.

There are new Universal Masterwork Components that players can loot and find, including Extended Sniper Magazine, Rapid Hollow Points, and Extended Special Arms Magazine, which improves performance of various weapons.

Friendly player projectiles should now be able to pass through squadmates. Also the Colossus' Firewall Mortar should now spawn the Firewall effect when directly hitting enemies, sloped surfaces or next to walls.

Delay between visual effect and actual application of status effect has been reduced.

Check Out The Combat Guide Here!

Bug Fixes and Other Changes

Fixes were particularly made on the Titan where its projectile attack was hitting players even if evaded, and issues where it will not use all of its available attacks.

Javelins will no longer be hit by lightning strikes as frequently. This also fixes visual glitches where deployed abilities do not appear to other players, corrects application of status effects on players, and fixes bugs on Javelin abilities.

This update fixes numerous bugs on abilities, such as the Bulwark Point not getting proper duration increases from inscriptions, Interceptor melee gear not going on cooldown when used in air, and various ability charge issues.

Fixes were made for the Masterwork Colossus Stock Augment, Ranger Grenadier Component and Special Arms Ammo component and corrected their stat values.

Fixes were made particularly on NPC interactions and behavior, and various spelling and grammatical errors in journal and library entries.

In the new update, downed players are now revived when the stronghold boss is defeated. This also fixes fog wall issues, as well as world boundary issues.