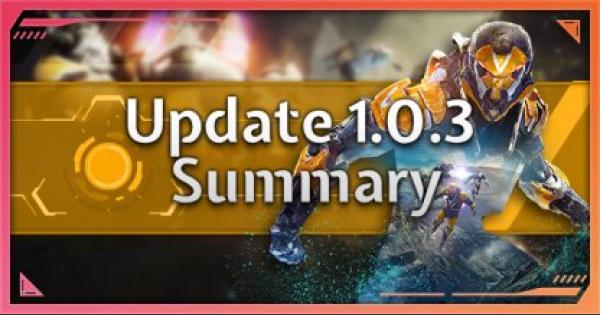 Check out this Anthem guide for a summary of changes in the upcoming new patch on March 12. This patch fixes the major PS4 crash and shut down issue, as well as major upgrades to Masterwork and Legendary items, quality of life updates, gameplay changes and more!

These updates are based on the official Patch Notes on the Anthem Official Reddit page.

We’re dropping the new #anthemgame patch ahead of schedule so you can all benefit from the updates and fixes, including improved stability on all platforms. Full update notes here: https://t.co/0nowcCJP0y

Major PS4 Crash Issue Fixed In The Next Update

One major issue PS4 players are encountering when playing Anthem is the hard crash and shut down that happens to PS4 consoles. This should now be fixed in the latest update.

Masterwork and Legendary items will be adjusted for proper damage scaling, especially in Grandmaster 2 & 3 difficulties. This means that melee and ultimate damage will increase due to higher gear power numbers.

Quickplay missions will now be fixed to remove non-progressing objectives, resulting to "dead missions". This also means that players will no longer be matched to players on "dead missions".

A common issue on the game is that players load into missions with a full ultimate bar, but cannot actually use the ultimate. This UI glitch will be fixed in the next update.

You Can Now Prime Titans

Titans seem to be immune to combo priming since launch. The next update will now allow Titans to be primed for combos.

Check Out How To Trigger Combos Here!

Masterwork weapon damage will be significantly improved in the next update.

It appears that the standard Lvl 1 Defender deals more damage than intended. The next update will fix this issue.

Green and White Loot Will Be Removed for Level 30

Green and White loot will no longer appear for players at Level 30, and is confirmed to be implemented on the next patch.

A feature limited to squad play which is the expedition quick launch, will now be making its way to single player. Now players can quickly launch an expedition without walking all the way to the Javelin forge.

Colossus will now have a quicker recovery time after overheating or crashing after the update.

Much of the game's respawn restricted areas will be removed so players can get back into the action after being downed. For example, there will be a 30 second respawn cooldown time now for Stronghold missions.

Other Fixes Coming This March 12