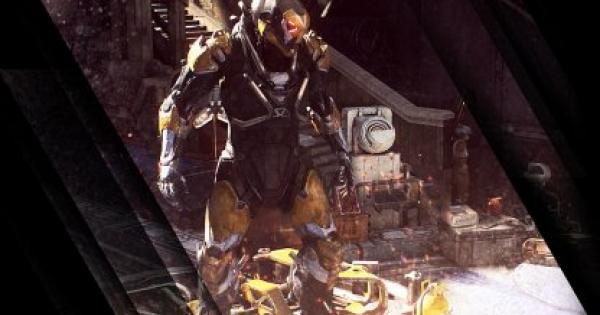 Anthem
Which Javelin To Use First: Choosing Your First Javelin

Check out this Anthem guide to find out which Javelin you should pick at the beginning - including recommended Javelins for beginners, what to choose, & more!

Due to its features, shield while hovering, AoE attacks to accomplish feats, and setting up combos itself, the Storm is a great Javelin to use early in the game. It is effective in farming EXP and raising your pilot level.

The Storm is a crazy powerful Javelin when it is hovering. It creates an electric shield around it when it does and this lessens the damage it receives from enemy fire. It also boosts the Javelin's shield stats when hovering.

Storm Can Hover Longer Than Other Javelins

One of Storm's important features is that it doesn't increase its heat gauge as fast as other Javelins when it is hovering. This allows it to hover for far longer than other Javelins.

Attacks Can Take Out Bosses & Mobs With AoE Effect

The Storm's attacks specializes in Area-of-Effect damage, allowing it to deal damage to bigger foes while destroying smaller mobs around it. This is a great way to accomplish Feats that can grant more EXP in the game.

Can Easily Set Up Combos By Itself

The Storm can easily prime targets and detonate them by itself. This creates devastating combos that can take out enemies very quickly and effectively.

The Interceptor is built for speed. It can dodge in and out of battle, allowing it to deal fast damage. It can also recover its shield pretty fast. Use the Interceptor if you want fast & mobile attacks.

Built For Mobility With Triple Dodging

The Interceptor is a Javelin that specializes in fast movement. It is the only one that can dodge up to three times in a row, making it the most maneuverable out of all 4 Javelins.

Still Mobile Even When Ultimate Ability Is Activated

Aside from triple dodging, the Interceptor is the only Javelin that can move when using their Ultimate Ability. This allows you to deal with several enemies at once.

Can Mark Targets To Take Them Down Easy

One of the Interceptor's abilities is to mark a target - this boosts your stats against the opponent and allows you to deal even bigger damage to it. This is very useful against tankier foes like Ash Titans, etc.

Melee Attacks Have No Cooldown

The Interceptor's melee attacks have no cooldown and can be used at will any time in the battle. This is mainly used for close quarter combat or to quickly take down foes when your weapon needs reloading.

Melee Can Be Detonator Attacks

The Ranger is a well-balanced Javelin that excels in mid-ranged combat. It specializes in focusing fire on single targets to take them down fast & easy.

The Ranger's Ultimate Ability shoots a barrage of rockets that you can spread out to multiple targets or focus fire on a single on. This makes it versatile in any situation - whether fighting against mobs or a big boss.

The Ranger's Ultimate Ability charges quite fast, more than some of the other Javelins. This way, you can do several Ultimate attacks within a shorter period of time.

Javelin Best Used In A Group

The Ranger is a great Javelin to use when playing with an entire group. It can do follow up damage to easily eliminate opponents or initiate hits that other Javelins can follow through.

Recommended To Be Unlocked Later In The Game

The Colossus is a Javelin that is recommended to be unlocked later in the game when you have more components and a higher pilot level. You'll need more gear to make it a powerful Javelin in-game.

The Colossus needs more preparation time to be effective in battle. You need more components and gear to build up your HP and defense stats to be more tanky in fights.