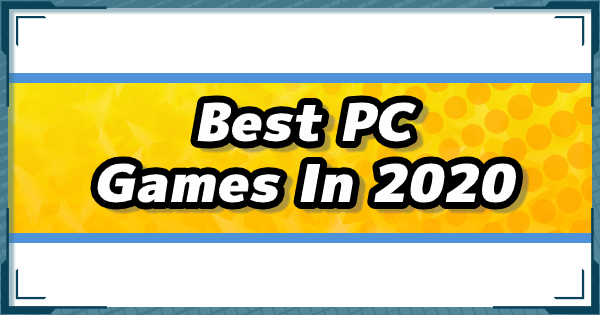 Here's all the most anticipated upcoming games releasing in 2020 on PC. List includes Ori and the Will of the Wisps, Cyberpunk 2077, Halo Infinite, and more!

Ori and the Will of the Wisps

Ori and the Will of the Wisps releases on February 11, 2020 for the XBox One and PC. It is a sequel to the original action/platformer Ori and the Blind Forest which has you exploring a gorgeous and exotic world as you unravel the mystery of the main character: Ori, and his destiny.

Night City is a megalopolis that oozes power, fashion, and body modification. You are V, a mercenary outlaw whose mission is to hunt down a rare implant that holds the key to immortality. How you handle everything that stands between you and that chip is completely up to you. Cyberpunk 2077 launches on April 16, 2020 for PC, PS4 and Xbox!

Doom Eternal which will be released on March 20, 2020 is the direct sequel of Doom, which released in 2016. While having its rip-and-tear combat experience being true to the original, the latest title of Doom franchise will have much more higher speed and power added to the exhilarating battle system.

After the long wait, Diablo 4 is officially unveiled at Blizzcon 2019. Diablo 4 is the classic isometric action RPG with dark non-linear campaign. Diablo 4 will be playable on the latest platforms such as PS4, Xbox, and PC with beautiful graphic.

Latest Overwatch is expected to release with new story mode, maps, Heroes, PvP mode, and more! There are also new features such as leveling up your hero for new ability.

Watch Dogs Legion is the latest installment in the Watch Dogs series. Releasing on Xbox, PS4, PC, and Stadia, take control of anyone and build up the resistance to fight back against the those out to ruin the the once great city of London!

Gods & Monsters is a new open world adventure game created by the team of Assassin's Creed Odyssey developers. Use the power given by gods of Olympus and go on to the adventure to save the Greek gods.

Dying Light 2 is the sequel to the original Dying Light. The game is set 15 years after humanity fell to the virus. You are Aiden Caldwell, an infected survivor. As someone with a unique set of skills, it's up to you to make tough decisions and sacrifices that will decide the fate of a city that's on the brink of collapse.

Resident Evil 3 Remake releases on PS4, Xbox, PC on April 3, 2020, and modernizes one of most well-loved survival horror games! Take control of Jill Valentine as she attempts to escape Raccoon City while trying to hold Umbrella accountable for their actions.

The Gungeon is collapsing! Armed with an ever-changing weapon and the trusty dodge roll, make your way out of there in one piece! Face off against challenging bosses, difficult bullet hell stages, and multiple enemies as you fight to escape from the crumbling Gungeon!

Read More On Exit the Gungeon & Its Latest News

Panzer Dragoon, the sensational shooting game released in 1995 on Sega Saturn, will be back with improved graphics and controls. Pilot the armed flying dragon and fight back the enemies.

Play a dark, thrilling suspense adventure and escape from the signal tower. Navigate Mono the little boy and outsmart the scary enemies such as the sadistic teacher and bloodthirsty hunter.

The Settler is the famous franchise made by Ubisoft. Build your own settlement by mining, farming, hunting, and even fighting a war. Co-op with your friend to challenge the mission together.

Lightmatter is a first-person puzzle-solving adventure game which you try to solve the puzzle without being exposed to the shadow, because the shadows kill you in this world.

The Walking Dead: Saints and Sinners

The Walking Dead: Saints & Sinners releases on January 23, 2020 for the PC. Carve out your fate as you make moral choices that affect the world around you. Survive and uncover a secret that will determing the fate of all the people trapped in war-torn New Orleans.

Read More On The Walking Dead & Its Latest News

Half-Life: Alyx is the prequel of Half-Life 2 which play as Alyx Vance. This game is built for VR so you can immerse yourself in the world of Half-Life by using VR headset.

Sons of the Forest

The "Sons of the Forest" — sequel to the open world survival horror adventure "The Forest" — will similarly put you in a shoes of a survivor, desperately fighting for your life being stranded in a forest plagued with man-eating savages, deadly wildlife and unspeakable horrors.

Read More On Sons of the Forest & Its Latest News

Halo Infinite is the latest installment for the classic sci-fi shooter. The game will release for the Xbox and PC exclusively. Set after the events of Halo 5: Guardians, take control of Master Chief in his most ambitious adventure yet!

Humankind is a new 4x strategy game releasing for the PC. Create your own avatar and lead your civilization through 6 different eras as you explore, expand, exploit, and exterminate!

Monster Hunter World's enormous DLC Iceborne has a ton of new maps, actions, and monsters. Updates and new monsters keep on coming very frequently, which is guaranteed to keep you entertained for a long time. A PC version is expected to release soon as well.

Sable is a new exploration-based, coming-of-age game which puts you in the shoes of young explore: Sable. Discover the vast desert and find out its secrets! Armed with your trusty hoverbike, traverse through hidden ruins, fallen spaceships, and find your place in the vast galaxy!