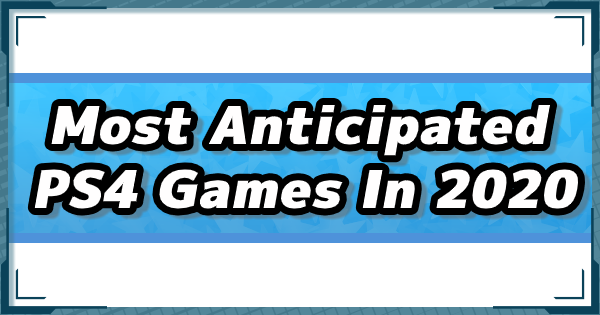 Here's all the most anticipated upcoming games releasing in 2020 on PS4. List includes Cyberpunk, Final Fantasy 7 Remake, and more!

Night City is a megalopolis that oozes power, fashion, and body modification. You are V, a mercenary outlaw whose mission is to hunt down a rare implant that holds the key to immortality. How you handle everything that stands between you and that chip is completely up to you. Cyberpunk 2077 launches on September 17, 2020 for PC, PS4 and Xbox!

Since FFVII originally released in 1997, we've been waiting for this moment. Final Fantasy VII Remake will release on March 3rd, 2020 for PS4. With the development team led by the original staffs of FF7, the timeless masterpiece will reborn with cutting edge graphic technology. Follow Cloud and Avalanche as they attempt to stop the Shinra Company from controlling the world!

Doom Eternal which will be released on March 20, 2020 is the direct sequel of Doom, which released in 2016. While having its rip-and-tear combat experience being true to the original, the latest title of Doom franchise will have much more higher speed and power added to the exhilarating battle system.

After the long wait, Diablo 4 is officially unveiled at Blizzcon 2019. Diablo 4 is the classic isometric action RPG with dark non-linear campaign. Diablo 4 will be playable on the latest platforms such as PS4, Xbox, and PC with beautiful graphic.

Persona 5 Scramble: The Phantom Strikers will be the sequel of the Persona 5. However, the battle system has dramatically changed from command battle to action-RPG. Become Phantom Theif and stylishly change the hearts of corrupted adults using the power of Persona!

The Last of Us Part II

The Last of Us Part II is the highly-anticipated sequel to the Last of Us. Set five years after the original game, Ellie and Joel have settled in a thriving community of survivors. However, things take a turn for the worse as a violent event disrupts the peace. Take control of Ellie as she once again journeys through the world to exact justice on the suspects, and find closure for herself.

Read More On The Last of Us 2 & Its Latest News

Latest Overwatch is expected to release with new story mode, maps, Heroes, PvP mode, and more! There are also new features such as leveling up your hero for new ability.

Watch Dogs Legion is the latest installment in the Watch Dogs series. Releasing on Xbox, PS4, PC, and Stadia, take control of anyone and build up the resistance to fight back against the those out to ruin the the once great city of London!

Dying Light 2 is the sequel to the original Dying Light. The game is set 15 years after humanity fell to the virus. You are Aiden Caldwell, an infected survivor. As someone with a unique set of skills, it's up to you to make tough decisions and sacrifices that will decide the fate of a city that's on the brink of collapse.

Resident Evil 3 Remake releases on PS4, Xbox, PC on April 3, 2020, and modernizes one of most well-loved survival horror games! Take control of Jill Valentine as she attempts to escape Raccoon City while trying to hold Umbrella accountable for their actions.

Ghost of Tsushima is a new action adventure game which releases on PS4 in the summer of 2020. This game focuses on the Ghost, the last surviving samurai in Tsushima during the first Mongol invasion. Take control of him, and fight back against the invaders to give Japan its independence.

Read More On Ghost of Tsushima & Its Latest News

Marvel's Avengers is an upcoming action adventure game coming to the PS4, Xbox, and PC. Play as your favorite Marvel Heroes and relive the events of A-Day a catastrophic event that resulted in heroes being outlawed.

Dreams is the newest game from the creator of Little Big Planet! Create your own game by sculpting and animating your own sculptures and models! Shape platforms, design the overworld, and more! Once you've created your game, you can then share it with other players to enjoy! The possibilities with this game are endless!

Hunt: Showdown is a new game that puts you in the shoes of a bounty hunter in 19th century New Orleans. It's your job to hunt down monstrous creatures! Reap the rewards to upgrade your gear and hunt more dangerous game!