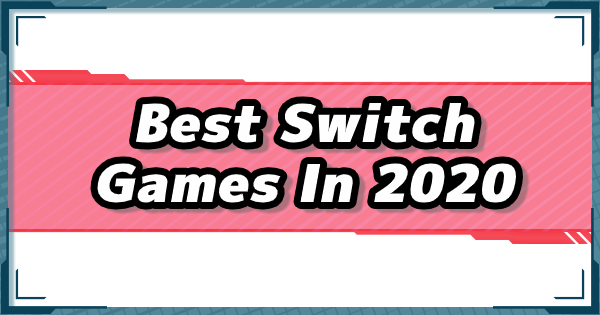 New Animal Crossing let you live in the deserted island full of untouched nature. Set your tent anywhere in the island and craft tools and furniture to enjoy outdoor life.

Take control of fan favorite Hornet as she explores a brand new haunting world ruled by Silk and Song! Meet new friends and foes in this sidescrolling metroidvania that features beautiful and haunting environments, fast-paced action, challenging puzzles and platforms, and more!

Persona 5 Scramble: The Phantom Strikers will be the sequel of the Persona 5. However, the battle system has dramatically changed from command battle to action-RPG. Become Phantom Theif and stylishly change the hearts of corrupted adults using the power of Persona!

Tokyo Mirage Sessions #FE Encore is a remake of the crossover game that blends Fire Emblem and Shin Megami Tensei gameplay in a fantasy plot that features stylish tunes, and even more stylish characters! This game releases on the Nintendo Switch on January 17, 2020.

Epic RPG game which originally launched in 2012 on Wii will be remastered for Nintendo Switch. Play as Shulk and go on to the adventure to save the heroine Fiora.

Orthodox RPG game Bravely Default 2, which is made by Asano Team of Square Enix, is expected to release on Nintendo Switch exclusively. Asano Team is famous for making popular JRPG such as Octopath Traveler and the prior Bravely series.

Gods & Monsters is a new open world adventure game created by the team of Assassin's Creed Odyssey developers. Use the power given by gods of Olympus and go on to the adventure to save the Greek gods.

Originally released for the Gamecube in 2003, Final Fantasy Crystal Chronicles: Remastered Edition is now making its debut on current consoles! Follow the Crystal Caravan as they journey to search for Myrrh, a precious liquid that protects their world from the deadly miasma!

Naruto Shippuden: Ultimate Ninja Storm 4 Road to Boruto is the latest installment to the series, finally making its way to the Nintendo Switch! This is an action fighting game where you face off against characters found in the Naruto universe! This game releases on Nintendo Switch on April 24, 2020.

Read More On Naruto 4 Road To Boruto & Its Latest News

BANDAI NAMCO Entertainment tagged with Koei Tecmo Games to create brand new One Piece game. Koei Tecmo is known for the creator of Dynasty Warriors series (also known for Muso series) series which allow players to slam large cloud of enemy with dynamic actions. When One Piece combined with this Muso-styled action game, you get an exhilarating action game!

Read More On One Piece: Pirate Warriors 4 & Its Latest News

Panzer Dragoon, the sensational shooting game released in 1995 on Sega Saturn, will be back with improved graphics and controls. Pilot the armed flying dragon and fight back the enemies.

Play a dark, thrilling suspense adventure and escape from the signal tower. Navigate Mono the little boy and outsmart the scary enemies such as the sadistic teacher and bloodthirsty hunter.

Moving Out is a new physics-based moving simulator that has you controlling a newly-certified Furniture Arrangement & Relocation Technician! Take on different moving jobs in the town of Packmore, and use your knowledge of furniture relocation and physics to get the job done!

Read More On Moving Out & Its Latest News