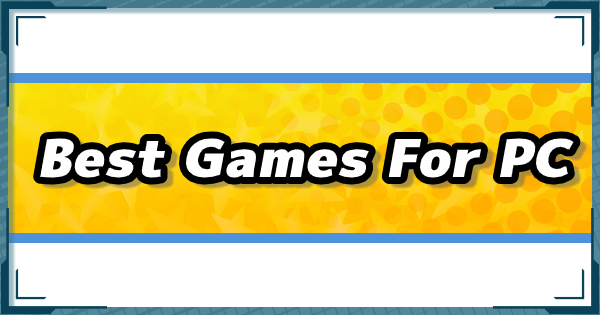 Check out the list of best games for PC released up until 2019; includes info on what are the popular PC games and why you should buy them.

PC Games You Should Play

We can't make a list of recommended PC games without mentioning this well Known TPS game Fortnite. Perhaps the most frequently updated game with many in-game cosmetics and new features. There are varieties of cross platform options available so you can enjoy playing Fortnite with your friends freely.

As the last game in the trilogy, Witcher 3: The Wild Hunt showcases state-of-the-art graphics coupled with a highly engaging storyline. Two massive DLCs available which let you enjoy the dark fantasy epic for long time.

Build Your Own Empire

Civilization VI is high tactical simulation game which you choose a real existed leaders such as Roosevelt and Victoria and build your own empire from scratch. There are other rival civilizations existing in your map and you might build a friendship or enter into the war. Build the greatest empire and rule the world!

A fast-paced FPS that continues to surprise even until the very end. Also, who wouldn't want to play as an angry demon-killing Space Marine? Doom Eternal, the higly anticipated sequel of Doom, is expected to release on March 20, 2020.

A Warhammer-based game that perfectly blends real-time strategy with some 4X elements. Will net you hundreds of hours with its campaign, and probably more with its robust multiplayer.

Apex Legends is not just normal FPS. Each playable characters have different traits and characteristics for you to play differently. Form a team and decide the role depending on your character and cooperate to defeat opponents!

Survive In the Godforsaken Land

A post-apocalyptic RPG that gives players the freedom to survive and choose how they live in an unforgiving and crazy world.

Compete with maximum 100 players and survive the battle royale to become the last man standing.

Popular 6v6 TPS game developed by Blizzard Entertainment is played by 40 million users. There are 31 playable characters (known for Heroes) in Overwatch and each has an unique skills on the battlefield.

Fight other players using medieval weaponry and arms, and experience large-scale battles and duels to the death.

Unravel The Origins Of The Assassin’s Brotherhood

Explore the ancient Egypt and fight against enemies and wild beasts to unveil the dark secrets. An action game with multiple adventures and missions that keep on coming.