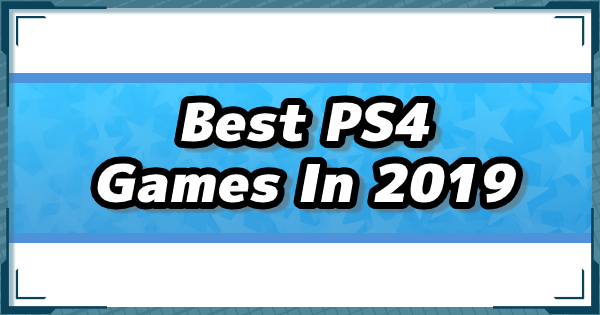 Check out the list of best games for PlayStation 4 released up until 2019; includes info on what are the popular PS4 games and why you should buy them.

PS4 Games You Should Play

Death Stranding, which is directed by Hideo Kojima, the creator of the Metal Gear Solid series, has come up with a totally brand new game concept. Starring Norman Reedus and Mads Mikkelsen, Death Stranding's main character Sam porters packages from one place to another, in order to bridge the isolated cities of America and connect the disconnected continent once again.

FromSoftware, the maker of the Dark Souls series, have brought us the Japanese style Souls-like game Sekiro. Its story takes place in brutal 1500s Sengoku-era Japan, where the main character must fight with his Katana blade to rescue his lord. Realistic graphics and a tense battle system make this game highly appealing.

Call of Duty goes back to the thing that made it what it is today and remakes itself for a more modern audience. Modern Warfare, originally released in 2007, is reborn with a new story mode and game system. The new game mode Gunfight allows you to form a team of 2 players and battle against 16 other teams.

Click Here For The Call of Duty Official Site

Borderlands is a blockbuster game series known for its unique characters and exhilarating play experience. Choose from a nearly infinite numbers of weapons and blast away enemies. This game is also recommended for people who are not familiar with FPS, since you can level up and become stronger when you get stuck.

Respawn Entertainment, the developer of Apex Legends, have given us a new 3D Action game in the Star Wars franchise. This game covers the story of Cal Kestis, the survivor of Order 66. Travel across the galaxy as a Jedi and survive the infamous Order 66!

RPG Made By Square Enix & Disney

Go on an adventure with your favorite Disney characters! Just like previous entries in the Kingdom Hearts series, you will go on an adventure where you play as Sora. New DLC is also expected to release on January 23, 2020.

Monster Hunter World's enormous DLC Iceborne has a ton of new maps, actions, and monsters. Updates and new monsters keep on coming very frequently, which is guaranteed to keep you entertained for a long time. A PC version is expected to release soon as well.

The Tragedy Of Raccoon City Reimagined

The nightmare at Raccoon City is back with realistic graphics and a refined story. A deadly virus overran Raccoon City and the city is now full of flesh eating zombies. Escape from terrifying zombies and survive!

Venture the wild west as an outlaw from the 20th century in Red Dead Redemption 2 (RDR2). Become part of the gang and freely move around the open world map. You can also enjoy hunting wild animals, of which there are over 200 species.

Retired god-killer Kratos goes back to god-killing with his son Atreus. Explore the wide map and defeat enemies by cooperating with Atreus. This game also won numerous awards including the Game of the Year in The Game Award 2018.

Click Here For The God of War Official Site

Bloodborne encourages players to go at a faster pace and play mercilessly on the offensive. Online multiplayer mode is also available, which lets you play co-op with other players.

Join the mundane life of a group of teenagers going through everyday life, battling monsters and saving the world. You, the Player, live the dual lives of a high school student and a "Phantom Thieve" who enters the hearts of people and solves their conflict by using the power of Persona. Its sequel Persona 5 Scramble: The Phantom Strikers is expected to release on February, 2020.