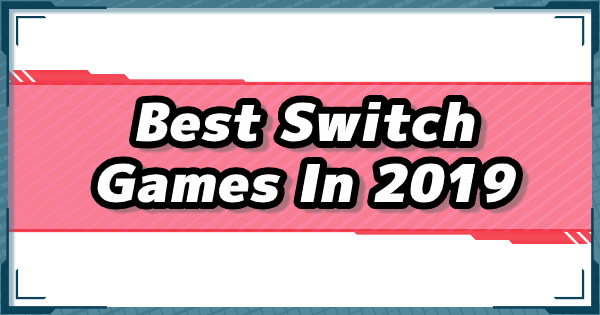 Check out the list of best games for Nintendo Switch released up until 2019; includes info on what are the popular Switch games and why you should buy them.

Switch Games You Should Play

Super Smash Bros. Ultimate, released by Nintendo in December 2018, is the biggest Super Smash Bros. game ever with over 74 playable characters, more than 100 stages, and 800 music tracks included.

Not only that - all characters from previous series appear and the game is still evolving with constant updates with newly added characters and stages. It's also noteworthy that Smash has a lively E-sports scene!

The Classic Zelda Is Back

The original Legend of Zelda: Link's Awakening released in 1993 is back. Use items, solve puzzles and fight enemies to uncover the truth and escape from Koholint Island.

You can also create your own dungeon with Chamber Dungeon mode by collecting dungeon parts called Chambers and combining them to create an original dungeon.

You will become the professor of the officer academy and guide your students on the battlefield. There are 3 classes in the academy and the story changes dramatically depending on which class you've chosen. You will soon find yourself immersed in the deep story through lot of quests and episodes with your classmates.

Sword and Shield Guide by GameWith

Meet new Pokemon in the Galar region with Pokemon Sword and Shield. A new battle feature called Dynamax and Gigantamax allows your Pokemon to become gigantic and get special moves. Fight 8 gym leaders and become the Galar Pokemon champion!

Build your own Mario course and upload it to share with others. By trying out other players' courses, you can have an endless supply of Mario levels to play! There is also a with your friends if you are too scared to play by yourself. The new character Gooigi, a gel formed version of Luigi, can pass through iron bars, allowing you to explore different areas.

Explore Around The World With Cappy

Mario meets the new character Cappy and travels all around the globe. By throwing Cappy, Mario can control certain objects, turn into enemies, and more!

Legend of Zelda: Breath of the Wild

This open world Zelda allows you to play freely on the enormous map. Beside completing the story, there are so many extra things you can do, such as slaying enemies, cooking, hunting & gathering, finding hidden dungeons and treasure, and more!

Click Here For Breath of the Wild Official Site

Shoot enemies and paint the floor to win the turf war. While Splatoon 2's online competitive play is the main battlefield of this game, you can also enjoy its story mode, and an exciting co-op mode called Salmon Run.

100% a JRPG at heart, Xenoblade Chronicles 2 offers players an adventure that's filled with interesting characters and fun moments. Will definitely cause you to play hundreds of hours.

Build The Farm Of Your Dream

Start your new life in Stardew Valley by creating the farm of your dreams and building a thriving home. Raise animals, go fishing, and tend crops to become self-sufficient. Latest update unlocked the multiplayer feature which allows you to play with up to 4 people.

Cook meals with friends in ridiculous situations and conditions. The players have to cook fast in appropriate orders by communicating with each other. Expect unbreakable bonds (and constant swearing) to develop while playing this game.